Cobrapost: For Rs 92,000 you can destroy reputations on FB, Twitter 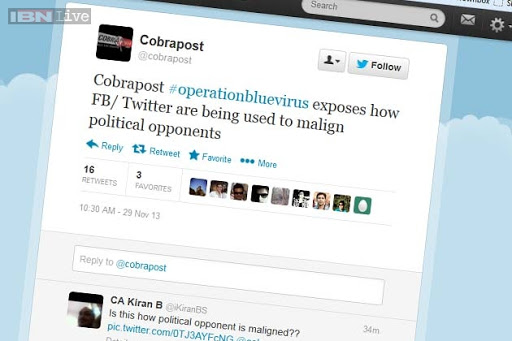 Undercover website Cobrapost has claimed to expose some of the IT firms for abusing popular social networking platforms  Facebook, Twitter and YouTube to help political leaders increase their popularity with forged ‘likes’, showing large number of fake followers, and running crusades against opponents and even producing terror amongst minority communities

According to Editor, Aniruddha Bahal of Cobrapost, their website conducted a sting operation termed as ‘Operation Blue Virus’, exposing approximately two dozen IT companies which are involved in the shady business practices of online reputation management.

Amongst various other deceitful things, the IT companies offer their clienteles, including politicians, false followers on Facebook and Twitter, and organize negative marketing campaign against their rivals or other parties involved with opposition party like a corporate house.

During the string operation, Associate Editor of Cobrapost, Syed Masroor Hasan, pretended to be a front man for a fabricated ‘politician’ of an opposition party, and interacted with more than two dozen IT firms regarding hiring their services for two main purposes. First task was to boost image of the ‘Netaji’ (politician) on social media platforms before the assembly elections and second task involved destroying the image of rival party candidates with negative publicity.

According to Bahal, the companies offered the following services:

The portal also claimed that some of the professionals were not above the idea of using bombs to scare people or spread false reports of riot situation, pushing Muslim voters to stay in their houses on the day of voting, as a result leaving plentiful choices for sham voting.

Legal Implications of The Actions exposed by Cobrapost

Several of the practices given above are recognized as crime under the territory of existing laws such as the Indian Penal Code, the Information Technology Act 2000, the Income Tax Act 1961, and the Representation of the People Act 1951.

Many activists are coming forward, showing their discontent against the unethical practices of reputation management companies. Social activist Tehseen Poonawalla, who has filed a legal complaint against Twitter, has filed an appeal in a court regarding the establishment of rules and regulations that would govern the activities on social media platforms.

Connect with us on Social Platform